It’s common to think about what a brand might want from the influencers it uses, but what about when the boot is on the other foot? How could retailers make themselves more attractive to the kinds of online partners that they would like to work with? AI analytics platform HypeAuditor, has released the global results of its Influencer Outreach Survey, revealing what influencers want to see from brand partners and why they would refuse to work with brands.

The survey, which polled over 1600 social media influencers across the globe, showed that 43 percent of influencers reported to have never or rarely received a personalised message from a brand tailored to their platform. This means that, in a large proportion of cases, influencers are being approached by brands with generic, cut-and-paste-style messages without personalisation to them or their platform.

According to the new data, 38 percent of influencers would refuse to work with a brand if they have no creative freedom, while over a third (37 percent) receive at least three partnership proposals from brands each month, with the most popular enquiries including free product testings (33 percent), sponsor posts (31 percent), and brand ambassador proposals (18 percent).

The survey also revealed why influencers would refuse to work with a brand, with the top reasons being that they do not like or value the brand (51 percent), that they were not happy with the budget (42 percent) and they were told exactly what to write and had no creative freedom (38 percent).

When asked what they’d like to see in messages from brands, to make it easier to select potential brand partners, the following top reasons were selected:

“I am six feet tall, yet it does not stop petite clothing brands from contacting me”

Harriotte Lane (@harriotte_), Instagram beauty influencer and Miss International UK 2019 with a reach of 65.5k followers, shared her experience working with brands, reflecting on the lack of personalised messages: “It is often clear that brands are more interested in numbers of likes instead of relevant audience reach,” she said. “I am six feet tall, yet it does not stop petite clothing brands from contacting me for partnerships, which I find odd, especially when they suggest modelling their clothes while sitting down…”

She added: “It would be nice for brands to encourage creative input, instead they often have a brief that is one size fits all.” 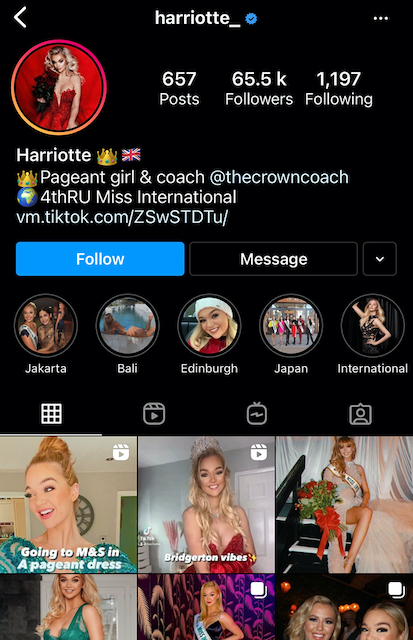 It seems clear that most influencers value a more personal touch, says Alex Frolov, CEO of HypeAuditor: “We know that the best brand and influencer relationships are based on authenticity and meaning. This research has reinforced that from an influencer perspective, it is so important for brands to strike the right tone in their communication to influencers, prioritising personalisation and clarity above anything else.”

To coincide with the launch of the Influencer Brand Survey, HypeAuditor has launched its Influencer Outreach tool, to allow marketers to research and liaise with influencers from within the HypeAuditor platform. Frolov believes this can be a big help to brands as they look to make valuable online partnerships: “With our new outreach tool, we’ve made it easier than ever for brands to discover, analyse and reach out to potential influencers, all in one platform.”