Back in 2016, DBS Singapore were looking for a unique story-telling vehicle to engage a broad-based audience and to better connect with today’s banking customers. With audiences increasingly consuming video content online, DBS chose to create a mini-drama series on YouTube, with storytelling, inspired by real-life stories, that would help to humanise banking.

The result was a long-form branding video series called Sparks. An industry-first, each of the episodes could last up to 15 minutes, enabling DBS to tell relatable stories of banking with a purpose and with more depth, as opposed to traditional 30 or 60  second TV commercials.

The series quickly resonated with online audiences. In fact, it garnered more than 230 million views, became one of the top 10 ads watched on YouTube, and scooped a number of awards. The series also led to a 159% uplift in brand interest and a 46% recognition score in awareness and advocacy.

Given the success of season one, in 2019 DBS launched a second season of Sparks on YouTube. Themed “Everyday Heroes for a Better World", season two focused on sustainability and explored social issues such as food waste, plastic pollution and social inequality, with an aim to drive a greater sense of urgency about the need to act.

For Sparks season two, DBS decided to experiment with its performance marketing strategies. "To reach audiences where they are most present, we added connected TV advertising into the mix of our digital video ad buys, which drove 30% more completed views of Sparks ads," says Krishna Kota, senior vice president, group strategic marketing & communications at DBS Bank.

"We also experimented with personalising the way we reached audiences on YouTube with YouTube Instant Reserve campaigns that allowed us to match audience profiles with the theme of each episode," explains Kota. "For example, people with an interest in cooking watched ads for an episode that focused on reducing food waste. This approach saw a 46% lower cost per click and 2X the number of impressions compared to regular open auction ad buys."

Encouraged by these results, Kota and his team went a step further by teaming up with Unruly, a leading video advertising platform that brings emotional intelligence to the ad ecosystem. The partnership with Unruly enabled DBS to reach audiences based on emotion-and personality-based criteria using its proprietary Unruly EQ tool. This resulted in a 50% increase in click-through rates and a 19% increase in video completion rates.

"One of the most important lessons we learned from the Sparks campaign was the value of continuous testing and learning," says Karen Ngui, head of group strategic marketing and communications, DBS. "We knew from our research that perceptions were positively impacted when a viewer actually watched the videos. However, each Sparks episode can last up to 15 minutes, so our challenge was to entice consumers to hit the play button and watch the episode. To help us achieve this, we experimented with fringe content that had different ‘hooks’ which we believed would resonate with different groups."

One example of this experimentation came in season two of Sparks, where in an effort to leverage technology to augment content and better target and engage audiences, DBS tapped on Facebook’s branded content ads and augmented reality (AR) technologies to run a campaign focused on raising awareness about sustainable fashion choices.

The Facebook video ads featured a preview of the AR camera filter game developed jointly by DBS’ in-house Sparks Studio and Facebook marketing partner Meshmind. They further amplified the campaign by engaging influencers in Singapore to produce branded content of them playing the game. The objective was to draw audiences into a journey of discovery about sustainable fashion as they engaged with content delivered through various touchpoints. 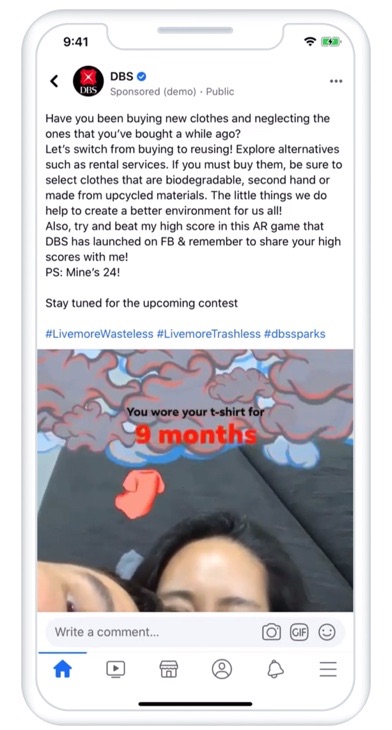 The experiment paid off, and the campaign proved to be successful. In total, 160,000 people launched the augmented reality game, ad recall increased by 4.8 points and brand equity saw a lift of 2.1 points.

While experiments like this were a success across key brand metrics, DBS was keen to learn more about the impact of the Sparks campaign on business performance. So for season two of Sparks, DBS partnered with Google, Kepler APAC, and Kasatria, a Google Marketing Platform partner, to track the impact of the brand marketing initiatives on customers’ actions.

"To help with measurement of Sparks video campaigns, we combined YouTube viewership data from Display and Video 360 with our first-party website data in Analytics 360 to understand the overlap between the two," says Kota. "With Campaign Manager, we could view the number of people who watched Sparks videos and went on to know more about a product or submit an application for a financial product on the DBS website."

In Singapore, view-through attribution from the Sparks campaign led to 17% of new wealth inquiries, as well as 15% of new loans and SME product applications. What’s more, awareness of Sparks has increased the likelihood of using DBS Bank products and services by ~10% compared to those who were unaware.

"By finding synergies between branding and performance marketing efforts, we noticed an increase of 25% in submissions of online applications, especially for services related to SME and business banking, investments, loans, and insurance," says Kota. "Armed with these insights, our team can now make data-driven decisions to optimise future brand campaigns."