It found that across regions, the UK led global brand risk reduction in video environments, with the lowest levels of brand risk on desktop video compared to all other markets.

The report provides transparency into how UK media quality performed in the first six months of 2021, with a YoY comparison. It also provides global benchmarks for brand safety and suitability, ad fraud, and viewability trends across display, video, mobile web, and in-app advertising. 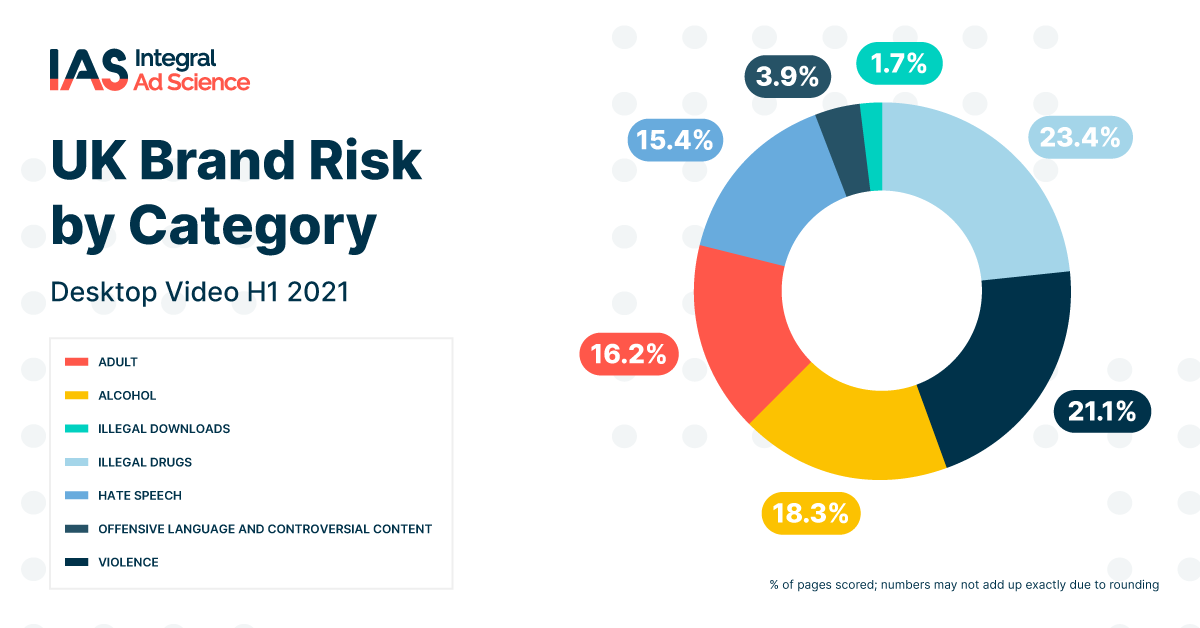 Nick Morley, Managing Director, EMEA, at Integral Ad Science, says: “It’s interesting to compare brand safety risks to those of a year ago, when we were all navigating the unforeseen circumstances during the pandemic and a rise in misinformation. The distinct reduction in brand risk this year suggests that industry stability is resuming, with confidence increasing towards video ad inventory as the economy recovers. The improvement around misinformation reflects the industry’s commitment to supporting high-quality media outlets and publishers. More generally, we believe the move away from a blunt approach to brand suitability towards a nuanced contextual strategy means advertisers won’t inadvertently miss positive opportunities to interact with engaged audiences.”

The data revealed significant changes in brand risk share between content categories that pose a threat to brands:

There was a significant improvement in the proportion of alcohol-related impressions flagged across all inventory types. In particular, desktop video decreased from 45.3 percent to 18.3 percent, while desktop display fell from 45.4 percent to 19 percent.

Industry-wide efforts and greater education to reduce the prevalence of offensive language and fake news are proving successful. The risk of appearing near offensive or controversial content, such as disinformation, has reduced across all environments. Mobile web display led the way in this risk category as its share dropped from 11.1 percent to 5.4 percent.

Adult, hate speech and violence content categories generally contributed a larger portion of brand risk across various environments when compared to the previous year. Specifically, the share of brand risk around adult content across desktop display increased 11.9 percentage points from 6.3 percent to 18.2 percent . Hate speech across desktop video increased 13.4  percentage points from 2 percent to 15.4 percent. And violence also presented a brand safety threat, with 36.1 percent of mobile web video ad impressions flagged as posing a risk including content around violence.

Advertisers have less time to engage audiences in the UK, compared to global averages

Mobile app display showcased the sharpest drop of impressions that remained in view, decreasing from 24.51 seconds to 18.12 seconds. Across desktop display, time-in-view of ads in the UK stood at an average of 21.16 seconds, compared to the global average of 22.67 seconds. This highlights advertisers' need to ensure ads attract attention within a more competitive environment.

Occurrences of ad fraud in the UK varied depending on ad inventory type, but still remained below global averages. Within advertising campaigns that used optimisation tools, the UK had the joint-second lowest level of ad fraud rates across mobile environments.

On mobile web display, ad fraud decreased from 0.5 percent to 0.2 percent  (versus a global average of 0.4 percent). Even on desktop display, ad fraud increased from 0.6 percent to 0.9 percent, but was still below the global average of 1 percent. Campaigns that did not incorporate a form of fraud mitigation strategy encountered levels of fraud up to 13x higher worldwide.

The full report can be viewed here.