This week, Facebook announced its plans to hire 10,000 workers in the European Union over the next five years to work on a new computing platform.

The company said in a blog post Sunday that those high-skilled workers will help build “the metaverse,” a futuristic notion for connecting online that uses augmented and virtual reality.

The platform will connect people virtually, opening up new inventory for performance marketers, but could raise concerns about privacy and the social platform gaining more control in people's online lives.

The ‘metaverse’ is a set of virtual spaces where users can create and explore with other people who aren’t in the same physical space. Beyond simple Zoom meetings, the metaverse combines virtual and augmented reality elements to work, play, learn, shop, and create within a shared 3D environment, often using VR headsets or augmented screens.

Consumer VR headsets are poised to enter a new phase of competitiveness with an increasing emphasis on supplemental metaverse platforms.

Facebook CEO Mark Zuckerberg has been a leading voice on the concept, recently announcing the social media giant is turning itself into a “metaverse” company.

Last week, executives from Facebook teased images of what appear to be two VR headset prototypes. In one photo, CEO Mark Zuckerberg displayed a next-generation Oculus headset experimenting with “retina resolution,” which in theory would offer a resolution so high it’s indiscernible from reality.

The announcement comes as Facebook deals with the fallout of a damaging scandal and faces increased calls for regulation to curb its influence.

With Apple also planning a mid-ranged mixed reality device and Sony planning to follow up to its hugely successful Playstation VR device,consumer take up is expected to boom as too are the performance marketing opportunities.

Consumer VR revenues worldwide are expected to increase from $3.5billion this year to $5.7billion by 2023, according to eMarketer. Augmented reality and mixed reality are not much further behind, with a similar growth trajectory. With programmatic ads now appearing on gaming worlds, increased adspend will follow. 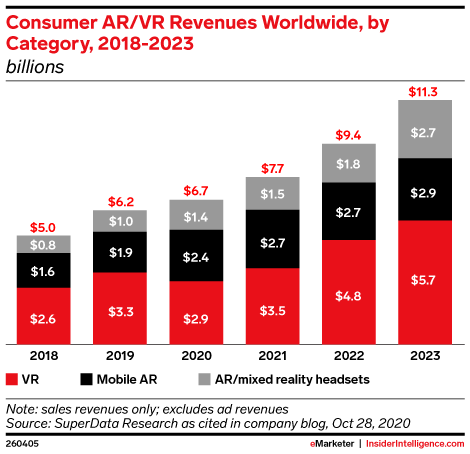 Metaverse marketing- the next level after mobile?

As Facebook and Apple ramp up the virtual space, the metaverse could become a necessity for all brands in the next few years. Facebook already has a social community set up, called Horizons, which works as a community hub for its latest virtual reality device, Oculus Quest 2.

The concept can be thought of as the successor to today’s internet, in the same way that today’s predominantly mobile internet has built upon the fixed broadband internet from the 1990’s and 2000s.

The rise of 5G, artificial intelligence (AI), and edge cloud processing is making it easier to deliver more smoother and cost-effective AR and VR experiences across connected devices.

There is a shift in business mindset and adaptation from looking at a virtual reality beyond just gaming to using VR to create, explore, identify, express, collaborate, and socialise. Accelerated by the pandemic and social distancing, VR is quickly moving away from the traditional stigma of being a waste of time to the next technology revolution.

"Brands will need to think beyond entertainment"

Josie Klafkowska, Global Marketing Director, Wunderman Thompson Technology, says: “It's no surprise that Facebook is making investment in the metaverse one of its highest priorities. Consumer reliance on technology has been steadily increasing, and we’ve now reached a point where we’re replicating our routines, interests and obsessions in digital worlds.

“We’ve already seen virtual and physical realities superimposed with the likes of Ariana Grande ‘s Fortnite appearance and ABBA’s upcoming digital shows. People will not only be socialising in digital spaces but working, shopping and discovering products there too, so it’s likely that more and more organisations will start incorporating it into their strategies in the very near future. However, to meaningfully engage with customers in the metaverse, brands will need to think beyond entertainment and novelty and consider how they can contribute to the creation of an inclusive and ethical virtual world.”

In a blog post explaining Facebook’s latest move, Nick Clegg, VP Global Affairs, and Javier Olivan, VP Central Products outline that the metaverse is “a new phase of interconnected virtual experiences using technologies like virtual and augmented reality. At its heart is the idea that by creating a greater sense of “virtual presence”, interacting online can become much closer to the experience of interacting in person. The metaverse has the potential to help unlock access to new creative, social and economic opportunities. And Europeans will be shaping it right from the start".

The blog continues: “No one company will own and operate the metaverse. Like the internet, its key feature will be its openness and interoperability. Bringing this to life will take collaboration and cooperation across companies, developers, creators and policymakers. For Facebook, it will also require continued investment in product and tech talent, as well as growth across the business.”