The latest IPA Bellwether Report, often seen as a key benchmark for the UK’s marketing industry, showed that UK ad budgets continued to rise in the third quarter, growing at the strongest rate since Q2 2017.

At a glance: the top line findings

The latest data marked the first time in three years that successive quarters of growth in overall marketing spend has been registered.

Many surveyed firms recognised the need to drive forward with marketing activity in the third quarter, with demand conditions bouncing back sharply and consumers looking to spend pent-up savings as lockdown measures were peeled back.

The effectiveness of the UK's vaccine programme was also a key pillar of support for businesses, and many firms expect its positive impact to continue. 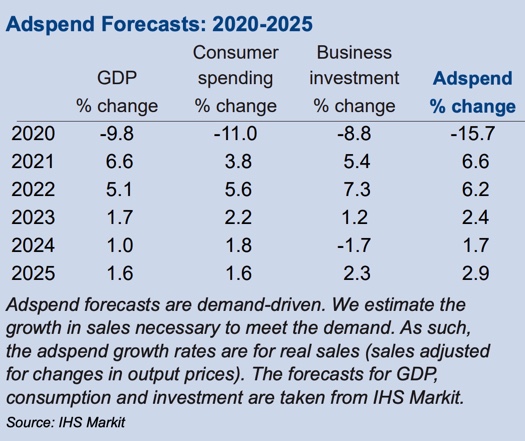 That said, although upward revisions to total marketing budgets were strong, they still fell short of the growth firms initially had predicted for the 2021/22 financial year, where a net balance of +17.4 percent of firms anticipated expansion.

Some surveyed companies were wary of lingering uncertainties, particularly around the trajectory of virus cases as we head into the winter period. Ongoing supply chain disruptions, which some firms mentioned had impacted their ability to carry out marketing campaigns, were also cited as a downside risk.

Main media advertising was the best-performing marketing category in the third quarter, with a net balance of +8.6 percent of firms recording upward budget revisions (from +1.3 percent), as more firms upped their spending on 'big-ticket' campaigns.

The remaining marketing categories were split between growth and contraction. Direct marketing was the next best performer, improving on the previous quarter (net balance of +5.6 percent, from +0.7 percent), while budgets reserved for sales promotions moved into expansion territory for the first time since the end of 2018 (net balance of +4.0 percent, from -0.7 percent). 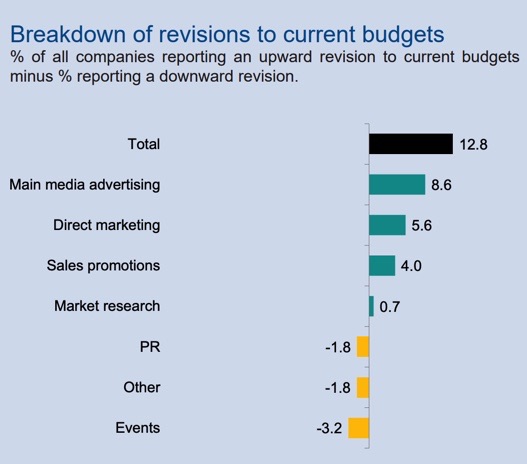 Strongest level of optimism for own-company finances since 2015

There was a further increase in optimism among Bellwether panellists during the third quarter, with improved expectations for growth at both a company-specific and industry-wide level.

A net balance of +37.5 percent of firms (versus +34.6 percent previously) were more optimistic about the financial prospects for their own company, which was the most bullish Bellwether panellists had been about their businesses since the first quarter of 2015. Around 48 percent of firms expect stronger growth than they did three months ago, compared to just 11 percent who were less optimistic.

Regarding their wider industry, Bellwether panellists also shared a more positive outlook during the latest survey period. A net balance of +22.6 percent of companies had a more upbeat view compared to three months ago. Although an improvement since the previous survey (+21.1 percent), it was still below that seen in the opening quarter of the year (+26.2 percent), which was the highest since the third quarter of 2014.

Paul Bainsfair, IPA Director General, says: “While we welcome the re-opening of global economies, it has brought with it various new challenges, particularly on the supply side. And there were widespread concerns among Bellwether panellists that supply shortages and issues with transport could hinder their business operations, and also impact their sales performances as many firms pass on these higher costs to their own selling prices.

“Having said this, we welcome the figures that reveal, in spite of this, advertisers are making the most of the overall economic uptick and are seizing the opportunity to invest in their brands. It is particularly good to see that companies are investing more in main media ‘big ticket’ campaigns, with these budgets revised up to the greatest extent since Q2 2017. As the evidence shows, investing in long-term brand-building media is paramount to a brand’s long-term success.”

Adspend growth forecast to soar further in 2022 despite concerns

The UK's recovery from the COVID-19 pandemic has been much faster than the Bellwether Report predicted this time last year, in part thanks to the success of the vaccination roll-out, but also owing to the positive impact the furlough scheme has had on keeping a cap on the unemployment rate, which has contributed positively to strong levels of demand for UK goods and services.

Bellwether author IHS Markit has revised its GDP growth forecasts for 2021 and 2022 higher since the last Bellwether survey, to 6.6 percent and 5.1 percent respectively, from 6.0 percent and 5.0 percent given the pace at which consumer spending has bounced back, with the UK's impressive uptake of the vaccine supporting this. These factors will continue to facilitate the recovery to pre-pandemic levels of economic activity, and as such, the Bellwether Report anticipates strong adspend growth of 6.6 percent and 6.2 percent in 2021 and 2022 respectively to accompany the strong economic expansion. 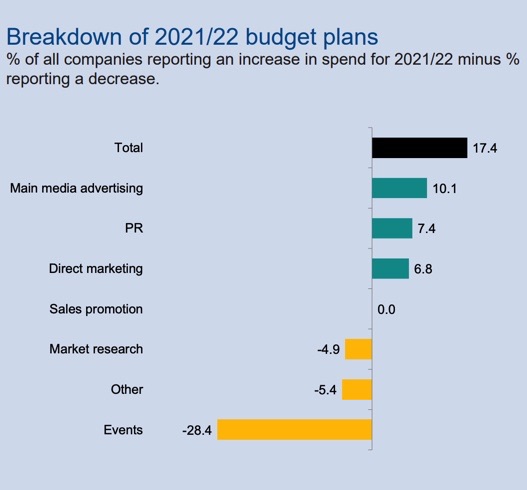 Beyond the near-term, IHS Markit expects rates of growth in both GDP and adspend to normalise from 2023 onwards. The forecasts for 2023, 2024 and 2025 stand at 2.4 percent, 1.7 percent and 2.9 percent respectively. While the Bellwether adspend forecast for 2023 has been revised slightly lower (from 2.7 percent), 2024 and 2025 have been lifted up slightly (from 1.2 percent and 2.4 percent respectively). As already mentioned, growth is very likely to slow in 2023 as IHS Markit expects pandemic-related losses to GDP to be fully recouped no later than mid-2022, while tax burdens are also set to rise in 2023, which will adversely impact domestic spending.

Joe Hayes, Senior Economist at IHS Markit and author of the Bellwether Report, adds: "The UK economy's performance over the third quarter has been remarkably positive, helped by the progressive loosening of containment measures and a successful vaccination programme. We couldn't have imagined such a fast recovery in economic activity earlier in the year when lockdown measures were at their most stringent.

“We're expecting UK GDP to have recouped all pandemic-related losses by no later than mid-2022, and Bellwether panellists have provided us with even more evidence that firms are working hard to re-grow their businesses, with one-in-four upwardly revising their total marketing budgets. As we said last time, we hope this is just the beginning, and businesses continue with their aggressive growth plans to keep momentum moving as the post-lockdown growth boom peters out."

“It’s time to be where your audience is”: 92% of TikTok users are ‘purchase ready’

AA/WARC: forecasters warn of a decline “in real terms” for UK 2023 ad market

KIA should have gone to Specsavers

Meta cheaper than 2021 pre-Black Friday, as tech giant ‘reels’ in spend with 4000% rise on short-form video