With people turning to online ads to boost sales, fraudsters have been rinsing businesses of tens and hundreds of thousands of pounds a year with fake clicks.

Ad fraud has spread thanks to media buying systems that are complex and opaque. Online display ads are most susceptible to this crime, alongside mobile apps. With its low-risk nature, criminal gangs are attracted to click fraud, using automated bots without having to lift a finger.

According to the University of Baltimore and CHEQ research, a single ad transaction involves as many as 20 or more players, whose interests are rarely aligned.One example of how fraudsters generate money is via mobile apps that fraudulently click on ads via bots to generate revenue for their developers. The advertiser is paying for a fake customer, and the money is going to the scammers that develop the app.

A milestone in ad fraud prevention

But there is hope that new industry measures are getting to grips with the problem. The digital ad industry reached a milestone accomplishment in its decade-long battle against ad fraud by holding invalid traffic (IVT), a key measure of such fraud, below 1 percent in US supply chain channels where multiple participants had adopted the same high anti-fraud standards.

A new study released by the Trustworthy Accountability Group shows that IVT in TAG Certified Channels fell to a record-low 0.86 percent this year, a fourth straight year of improvement and a nearly 50 percent drop from the rate measured in the study in 2018.

TAG Certified Channels are those in which a campaign runs through multiple companies that have achieved the TAG Certified Against Fraud Seal.

Mike Zaneis, CEO of TAG, says: “A sub-1 percent fraud rate has been our industry’s four-minute mile: a psychological and operational barrier that has seemed nearly impossible to break. Unlike an individual record in sports, however, achieving that milestone in advertising has required close collaboration across the supply chain. When multiple participants in every ad transaction set the same high and consistent standards, there are few cracks left for criminals to exploit, and ad fraud can be reduced to low and sustainable levels.”

The study, conducted by The 614 Group, also involved interviews with executives at agency holding companies and others who helped put those results in context, with many ad buyers expressing comfort with a sustained fraud rate around the 1 percent level or lower.

“We don’t have clients asking about fraud anymore”

In the words of one agency executive, “We don’t have clients asking about fraud anymore. They see the 1 percent number over and over again, and they’re aware of all the levers we’re pulling on their behalf.”

During those interviews – which included dentsu international, DoubleVerify, Horizon Media, Integral Ad Science, Interpublic’s Kinesso, OMG, Publicis Media, and WPP’s GroupM – agency executives also noted that advertisers now understand that their partners have established dedicated teams, processes, certifications, technology and partnerships to fight the issue, and that the industry continues to be vigilant about looking for and combatting new forms of IVT as they arise. As a result, they have a high level of confidence in traffic quality. 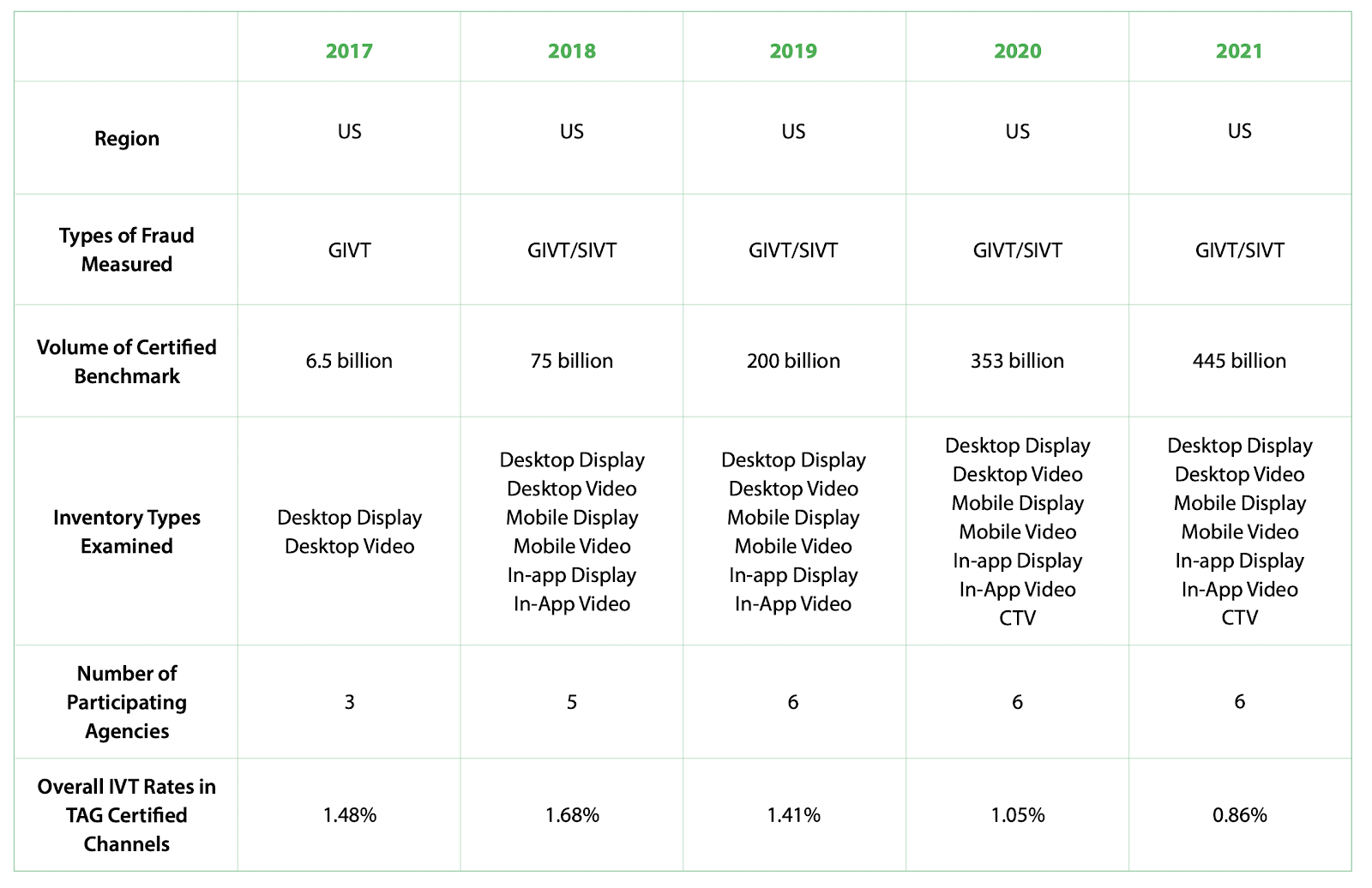 Rob Rasko, CEO of The 614 Group, adds: “The changes in the industry since we conducted the first US Fraud Benchmark Study five years ago have been nothing short of remarkable. In those days, major market participants often struggled with high levels of IVT in their client campaigns, and there was acrimony and finger-pointing over whose responsibility it was to fix it. Today, it is clear that TAG established standards across hundreds of key participants in the supply chain, and it has delivered confidence to ad buyers – as evidenced by the commentary – and data in today’s released research on the results of their process of certification.”

The full study and report can be found here.