From social purpose-driven campaigns and companies selling out products, to small businesses finding new customers on the platform, the 'Year on TikTok 2021' list celebrates the brands that struck a chord with the community this year and achieved impressive results in the process.

TikTok has rapidly grown over the past few years, ending 2021 as the world’s most popular domain, according to rankings from web security company Cloudflare, ahead of Google, Facebook and Amazon.

Commenting on the list, Kris Boger, General Manager, Global Business Solutions, UK at TikTok, says: "Looking back at what has been another exceptional year in marketing, what strikes me is the sheer diversity of brands showing up on TikTok, spanning all sizes and sectors, and the creativity they are bringing to the platform and community.

"With TikTok, there’s an opportunity to be at the epicentre of culture – somewhere all marketers strive to be - and each of these brands has grasped that in their own unique way. We're only just beginning to scratch the surface of TikTok's potential to help brands unleash their creativity, reach new audiences and monetise. I can't wait to see the amazing ways they'll continue connecting with our community in 2022." 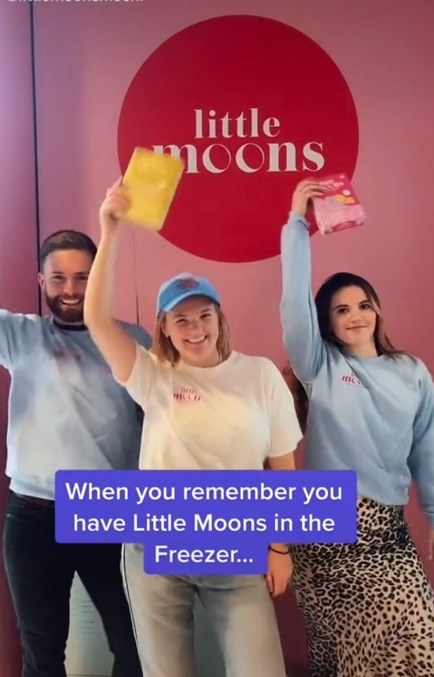 Little Moons became one of the country's most coveted treats after the TikTok community went crazy for its mochi ice cream bites, racking up 340 million views of the #littlemoons hashtag. Having built excitement on the platform organically, Little Moons capitalised on its success by using TikTok's ad formats to let people know that they can buy the sought-after dessert in their local Tesco supermarket.

In February 2021, Little Moons' sales were up a staggering 1,300% in Tesco vs. the same period in December, showing the impact of hashtags like #TikTokMadeMeBuyIt (6.8 billion views) - where people share their best TikTok-inspired purchases - and going viral on TikTok. 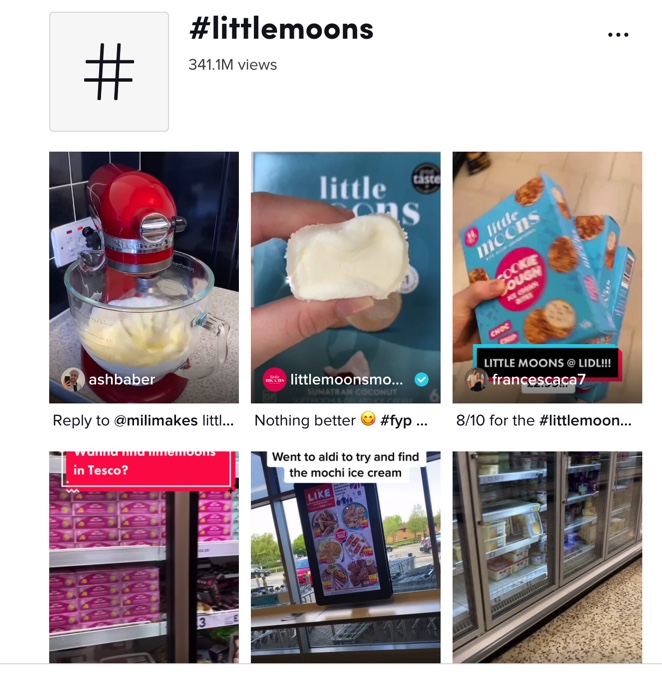 Meanwhile Asda became part of the viral #FetaPasta (1.1 billion views) trend by introducing a special Baked Feta Pasta bundle containing all the ingredients, which made it easy for people wanting to try out the recipe at home.

Enterprise technology giant Sage launched #BOSSIT2021, the first B2B campaign in the UK to hero entrepreneurs through a bespoke Branded Hashtag Challenge on TikTok. Taking note of the platform's growing small business community, the campaign spoke directly to this audience by encouraging them to creatively express how they were 'bossing it' in 2021, despite testing times. The campaign attracted 8.2 billion views, while several of TikTok's most popular small business creators also got involved, including illustrator @evamalleyart and hand-poured candle-maker @ivyandtwine. 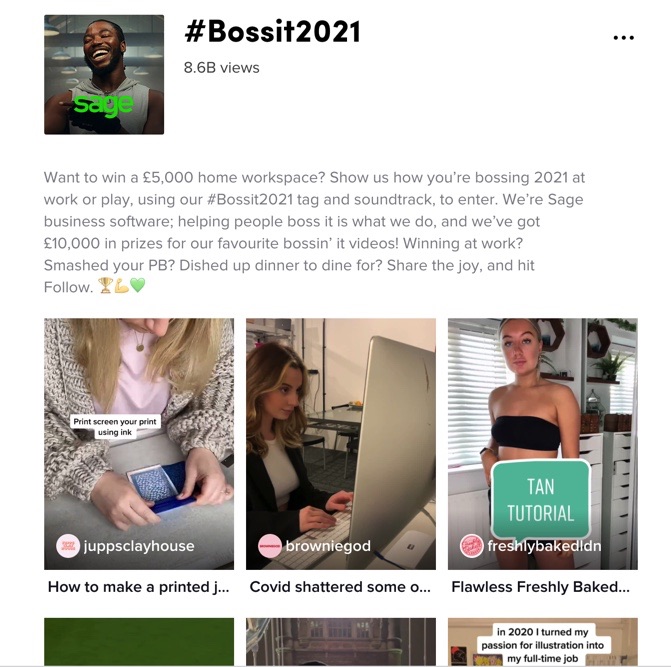 Cosmetics powerhouse M·A·C (@maccosmetics) also struck a chord with the TikTok community with its #LoveMeMode campaign celebrating beauty in all its diverse and unique forms.

Football may not have quite come home this year, but JD captured the spirit of EURO 2020 with #JDPassItOn, which has since reached 6 billion views. The challenge invited people to share their skills to the sound of new track ‘2Gether Now’, a remixed version of England’s EURO 2004 The Farm anthem 'All Together Now', with football creators including Pele Newell (@pelenewell), Ben Black (@benblackfootball), and Andrew Henderson (@iamandrewhenderson) all joining in. Developed in partnership with TikTok's Creative Lab, JD also launched the UK’s first augmented reality (AR) shoe try-on of Nike trainers through TikTok later on in 2021. 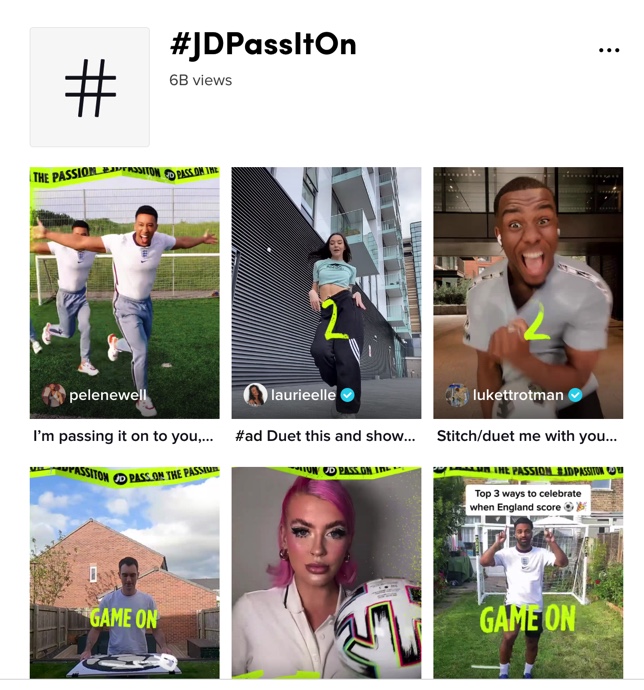 Microsoft's #StartUpShowUp campaign for the new Windows 11 challenged the TikTok community to start the day by celebrating their creativity and talents. The hashtag has received almost 4 billion views to date.

Sky Q partnered with well-known creator Sam Lewis (@EmileSam) for its #WhatShouldIWatch campaign (24.2 million hashtag views) to showcase the depth of content available to people on their Sky Q device.

New Look (@newlook) launched its new collaboration with singer Anne-Marie with the help of the TikTok community. #ThatNewLookFeeling reached over 3.3 billion views of the hashtag and over 258,000 creations around the world.

Earlier this year, Co-op became the first UK grocer to launch a TikTok Branded Hashtag Challenge with #CleanitScrunchitCoopit (4.7 billion hashtag views), aimed at demonstrating how easy it is to collect soft plastics to be recycled at home. 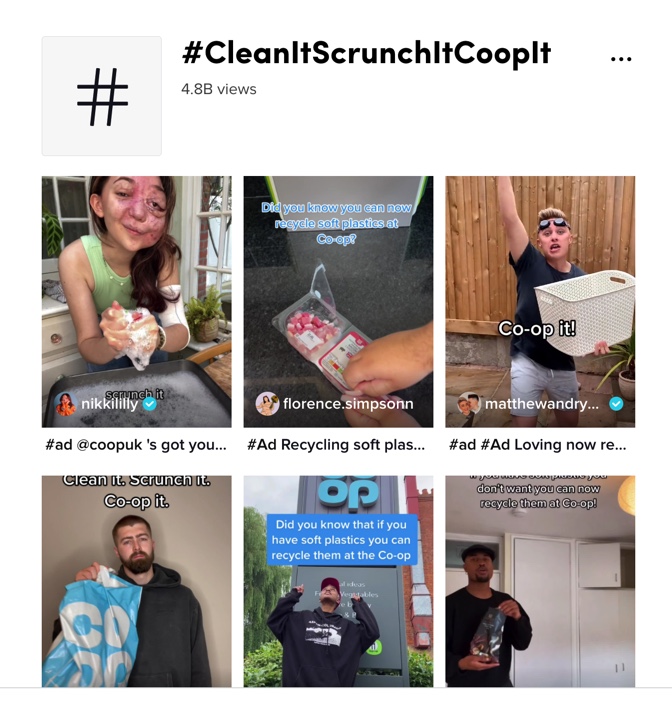 As the shift towards low-emission transport accelerates, car manufacturing giant Peugeot teamed up with TikTok for a new campaign aimed at debunking myths surrounding electric vehicles. The campaign featured a diverse range of creators - including entrepreneur and edutainer Max Klymenko (@maxklymenko), travel lover Lotte Boo (@lotteeboo3) and dad creator Rubber Hobo (@rubberhobo) - who drove far and wide in the new Peugeot fully electric e-208 and e-2008 to show how far an electric vehicle can take them. Peugeot also became the first automotive manufacturer in the UK to run TikTok's Spark Ads solution, which enables brands to amplify organic videos and target relevant audiences.

Nespresso invited the TikTok community to showcase actions having a positive impact in the world with its #NespressoTalents challenge, which is approaching a huge 5 billion views of the hashtag.

It may have been a decade since the original Old Spice, 'The Man Your Man Could Smell Like' ad first captured people’s attention, but TikTok's reimaged version of the classic put a unique spin on one of the most talked about ads of all time. Developed with Creative Lab, the TikTok iteration saw much-loved creators Munya Chawawa (@munyachawawa) and Niall Gray (@niall.gray) add a local twist to the ad by incorporating UK references, culture and distinctly British humour, all while bringing the Old Spice brand bang up to date for the TikTok generation. The #OldSpiceCaptain hashtag now has over 31 million views 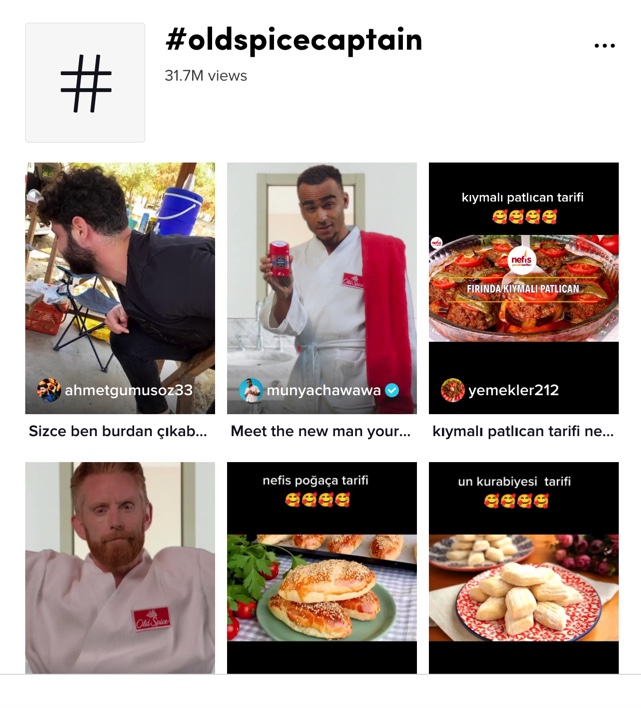 Hilton leveraged creators' insight and understanding about what works for their audiences by giving them creative freedom to share their own unique experiences of its hotels.

Costa Coffee (@costacoffee) showcased its menu through curated ads based on some of TikTok’s key subcultures, making each feel native to individual communities.

The #BeBold campaign from ellesse saw the label team up with TikTok for the first shoppable livestream concert hosted by a fashion brand with a music artist. The TikTok LIVE concert was fronted by Swedish singer-songwriter and ellesse's new brand ambassador Zara Larsson. Those tuning in during the concert saw clickable items of clothing appear on screen based on what Zara was wearing, which could then be explored and purchased directly within the TikTok app. The #BeBold hashtag has received 4 billion views on TikTok to date. 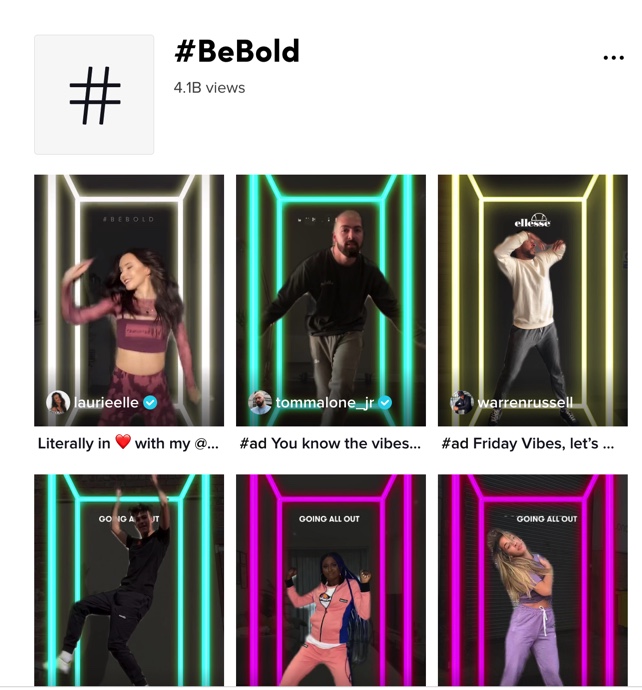 Very brought the nation together earlier this year for a giant singalong to “Our House”, the timeless 80s hit by Madness, culminating in a LIVE which featured Sophie Ellis-Bextor DJing behind the decks with her family.

Lucy Hitchcock was inspired to start her insulated wine bottle business Partner in Wine after a socially-distanced drink with her best friend in the park exposed a gap in the market. Since starting her business, she has consistently posted creative, real-life content on TikTok, leading to a viral video which racked up half a million views in 12 hours and saw an item selling every two minutes. Sales increased by 1,700 percent in a single day, which has turned into sustained five-digit revenue every month. Soon after, Partner in Wine confirmed the iconic retailer Selfridges as its very first stockist and recently made its debut in Oliver Bonas.

Liverpool-based eyelash experts Tatti Lashes' distinctively pink and fun content has made it a favourite among TikTok creators and celebrities alike, reaching 36.8k followers and counting. 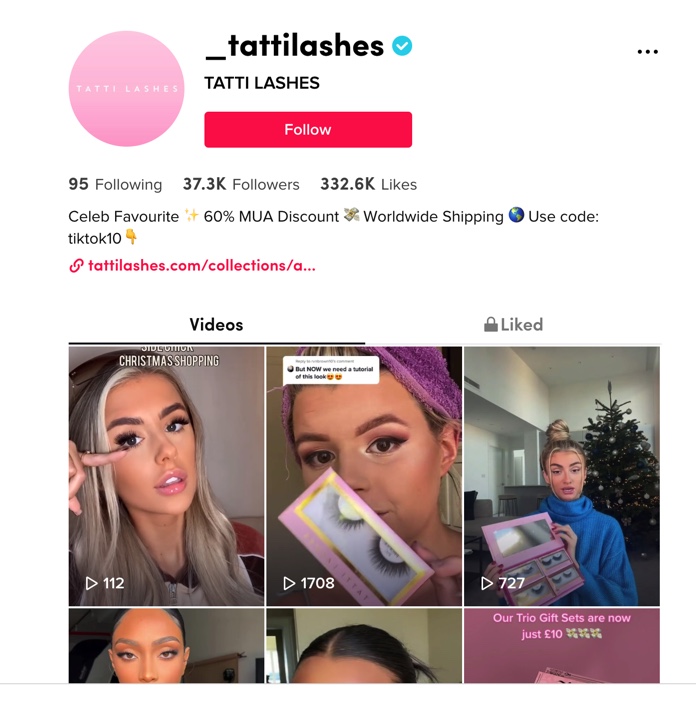 View more trends and ideas in the Year in TikTok recap video below:

Join us as we celebrate the trends, moments and movements that made 2021-of-a-kind. Thank you for being part of the #YearOnTikTok !