Last week, Twitter revealed a three-year long metrics error, showing the social network didn’t have as many users as it thought. In an earnings call, it admitted to overstating “monetisable daily active users” by between 1.4 million to 1.9 million.

The error could have nudged the company to accept Elon Musk’s proposal to take the company private in a $44bn deal.

Back in 2019, Twitter launched a feature that lets users with more than one account to link them together and switch between their different identities more easily. Those multiple accounts belonged to a single person, but continued to be counted as separate mDAUs.

The mDAU metric was not a standard industry measurement. Instead it was created by Twitter after struggling to show growth through measurements of monthly active users on a quarterly basis to represent logged in users across devices who were able to view its ads.

Twitter claimed this was different to daily active user numbers from other companies, as they would often use a broader metric that included users who were not seeing ads.

It says it revised the numbers for the mDAU metric for the past quarters where it had found it had been overcounting, and adjusted the totals.

The company noted the recast data was not available prior to Q4 2020 due to its data retention policies, but said its estimates suggested the prior period adjustments would not be greater than those seen in Q4 2020. 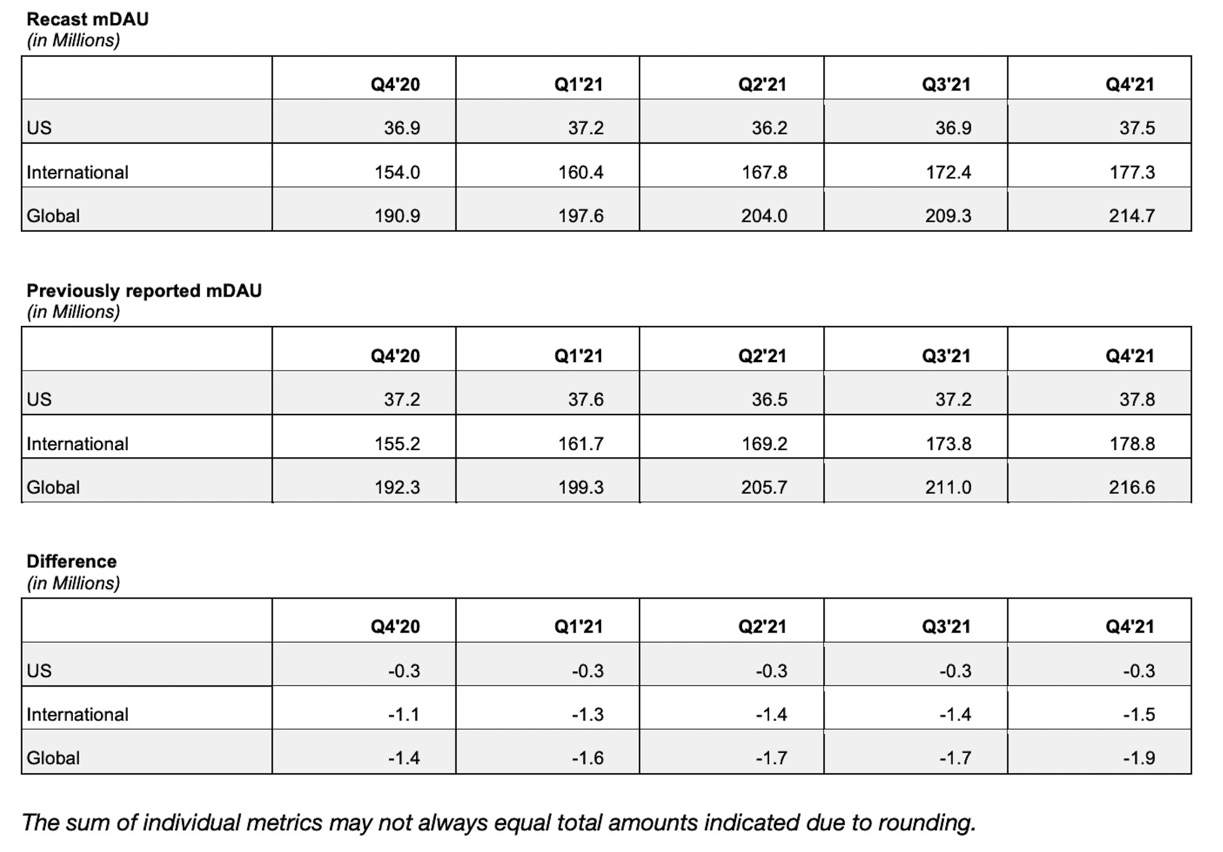 While the number is small (Twitter ended the quarter with 229 million mDAUs, up 15.9% from the same time last year) the discrepancy could have large implications on some smaller audience groups targeted by advertisers. That mDAU goal would have represented a roughly 20% compound annual growth rate from its base of 152 million mDAUs reported in Q4 2019.

These metrics are used for media planning and investment strategy, and could have resulted in advertisers placing too much of their budget in Twitter during the period.

The revelations come as Elon Musk announced plans that means some users will have to pay to use the service.

“Ultimately, the downfall of the Freemasons was giving away their stonecutting services for nothing,” Musk tweeted Tuesday. “Twitter will always be free for casual users, but maybe a slight cost for commercial/government users.”

Twitter is free for users at the moment, but also offers a subscription-based product called Twitter Blue in four countries: the US, Canada, Australia and New Zealand. The cost for US users is $2.99 per month.

In tweets that have since been deleted, Musk called for changes to Twitter Blue, including reducing the cost for subscribers and removing ads, according to The Guardian.

Last month, Twitter’s board accepted Musk’s offer to buy the company for about $44bn. The agreement includes a $1bn termination fee, which Musk will have to pay if he walks away from the deal.

A shift away from an ad-funded model

Musk is said to favour a subscription-based model over advertiser funding, as it would make Twitter less influenced by advertiser pressure.

“Free speech is the bedrock of a functioning democracy, and Twitter is the digital town square where matters vital to the future of humanity are debated,” Musk said in a press release announcing the agreement. He also said he will change algorithms and get rid of spam bots on the social media platform.

In a ‘pitch deck’ report seen by the New York Times, Musk has big plans to shake up Twitter, investing more in the field of engineering. He plans to make thousands of new hires, increasing the ranks to around 11,000 employees, up from 7,500 currently.

The proposed changes are part of Musk's plan to increase Twitter's annual revenue by five times current levels to $26.4bn by 2028, up from $5bn last year.

Due to the shift towards subscriptions, advertising on the platform is set to fall to 45% of total revenue by 2028, down from about 90% in 2020, the report indicates.

By 2028, he plans for ads to generate $12bn in revenue in 2028, while subscriptions are expected to pull in another $10bn, according to the report.

Musk has also suggested users could pay with cryptocurrency, including his favourite meme currenct 'Dogecoin'. Other revenue would come from businesses such as data licensing.