Independent media agency The Kite Factory reveals insights into the diversification of media consumption of UK adults and how audience attention within digital platforms compares to traditional media channels.

Using learnings from behavioural economics studies, the findings reveal consumer attention metrics across media channels, audience attention trends by age, as well as optimum times of the day and week to plan an advertising campaign to win attention.

Using IPA TouchPoints, The Kite Factory discovered that 54% of the 117 hours spent by UK adults consuming media each week were when they were feeling relaxed and engaged and more likely to notice advertising. The report identifies how best to reach audiences in these moments.

“This approach allows us to maximise the impact of client budgets and take a more considered approach to planning for hard-to-reach audiences who live a busy lifestyle. We have converted the data into a planning tool for everyone to access easily to consider in their channel planning.”

TV holds the highest share of consumption time as expected, yet only 58% of time watching TV is undistracted from any other activity. In contrast, broadcaster catch up services, such as All4 and Sky Go, (BVOD) can be seen as more efficient with a 9% higher amount of time spent undistracted.

Despite the lower weekly reach of TikTok, Twitter and Instagram, they have just as many attentive hours per week as spent on Facebook and OOH due to the nature of the social context in which we consume the channels.

Snapchat’s attention decreases by age faster than any other channel – dropping by 50% from 18-24 year-olds to 25-34 year-olds with a continual decline. Whereas, linear TV increases with age reaching a high of 18 attentive hours per week for 65-74 year-olds.

Non-working hours get the least distraction

When looking at most attentive times or days, the report found higher attentiveness at weekends and out of working hours through the week across key channels – YouTube, Instagram, Twitter, and radio. However, Snapchat and press came out higher in the week for the younger and older non-working age groups respectively.

Using the research, The Kite Factory has created a planning tool that can increase the impact of advertising by selecting audiences and channels most suited to a campaign objective and isolating when and where to reach them through the week, when they’re least distracted. 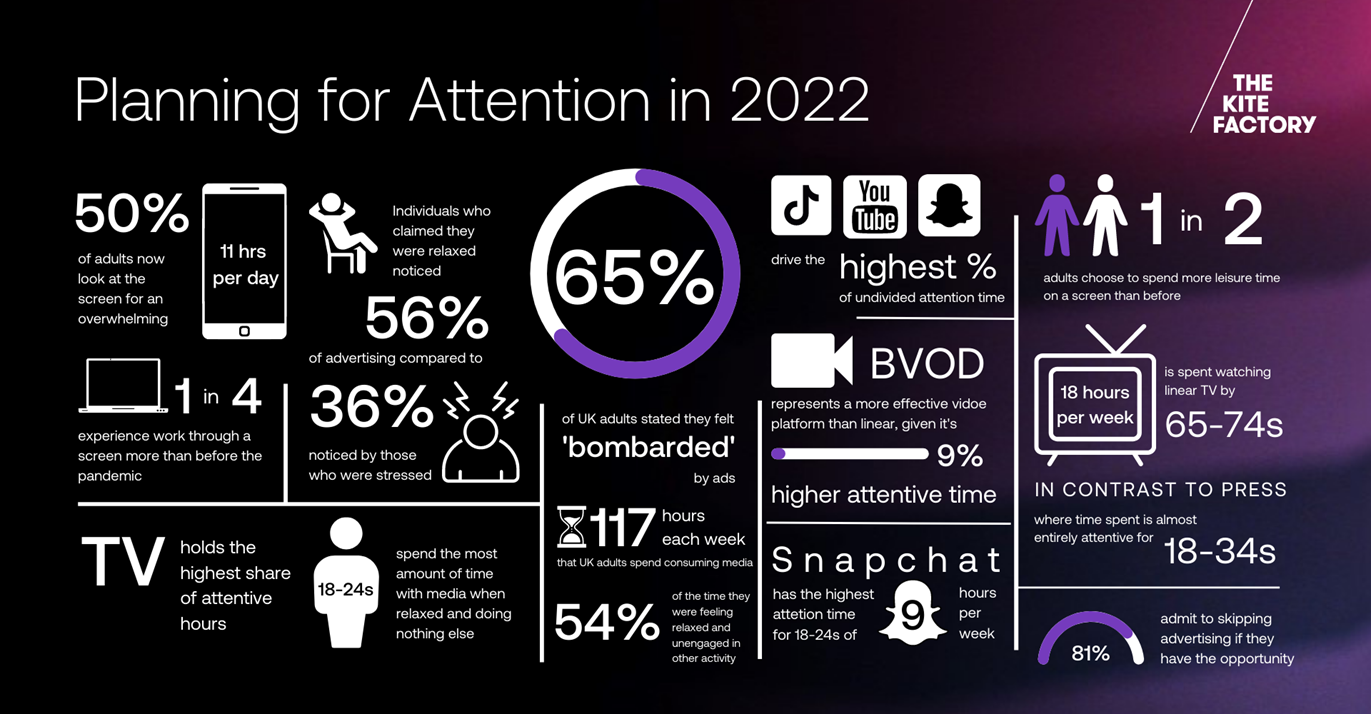 Cost of living crisis fuels UK searches, while people look for aid to get on the property ladder and travel still high on the agenda

34% of Brits spent more online in the past six months, but purchasing power likely to reduce