Google has announced that it will delay its replacement of third-party cookies, a practice long used by advertisers to monitor user behaviour and campaign success.

In the latest update on its plans to replace third-party cookies for advertising, Google says it will now hold off until the second half of 2024.

The internet giant is also expanding its Privacy Sandbox trials, which is being put forward as a way to curtail improper tracking while continuing to allow ad targeting within Google’s Chrome browser on PCs and Android mobiles.

A key tool in a performance marketer’s arsenal, cookies are small pieces of code that websites deliver to a visitor’s browser and monitor the sites they visit.

The practice has fueled much of the digital advertising ecosystem and its ability to track users across multiple sites to target ads.

In a blog post on Wednesday, Anthony Chavez, Google’s Vice President of Privacy Sandbox, wrote: “The most consistent feedback we’ve received is the need for more time to evaluate and test the new Privacy Sandbox technologies before deprecating third-party cookies in Chrome. As developers adopt these APIs, we now intend to begin phasing out third-party cookies in Chrome in the second half of 2024.”

Google said last year it would end support for those cookies in its Chrome browser by early 2022 to give time for publishers and advertisers to come up with alternative ways to monitor performance without invasive tracking techniques.

But in June 2021, Google pushed back the timeline, giving the digital advertising industry more time to iron out plans for more privacy-conscious targeted ads.

This second delay comes as advertisers are still reeling from Apple privacy changes last year, which reduced targeting capabilities by limiting advertisers from accessing an iPhone user identifier. Rival Facebook said the changes will end up costing it $10bn this year.

It also comes as lawmakers across regions are examining Google’s dominance in the ad tech ecosystem.

“A welcome development for the industry”

Townsend Feehan, CEO of IAB Europe, said: "Google's decision to extend the timeline before phasing out third-party cookies is a welcome development for the industry that should help ensure a range of alternatives to third-party cookies that are technically robust and whose implementation has been thoroughly tested from a privacy compliance and commercial performance point of view.

"The scaling up of the origin trial for the Privacy Sandbox APIs is also an important step to enable meaningful testing of these new technologies by a variety of players."

Opening up Privacy Sandbox trials to a much larger audience

Google is also expanding the testing windows for the Privacy Sandbox APIs, an initiative launched in 2019 to find alternatives to the cookie while mitigating the impact on publishers and other players.

Developers can already test these APIs today, but beginning in early August, trials will expand to millions of users globally and become generally available in Chrome by Q3 2023. 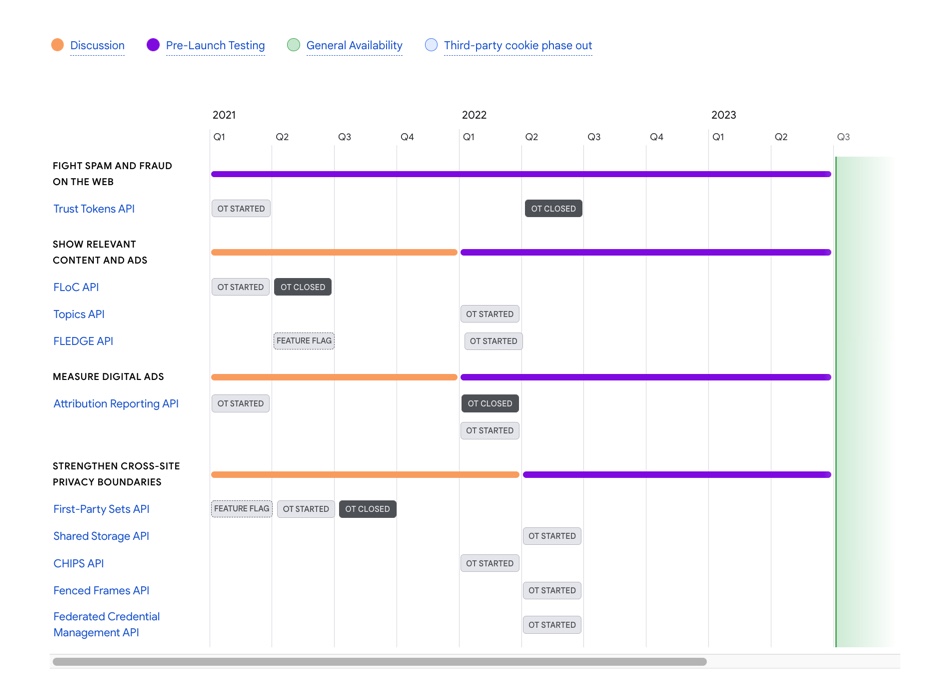 Before users are added into the trials, they will be shown a prompt giving them the option to manage their participation.

PMW quizzed performance marketing experts for their take on the news. A selection for their comments are given below.

Read the full analysis on the implicatons for performance marketing from our team of experts here.

Heather Lloyd, Head of Product Marketing at Nano Interactive: “Savvier advertisers are already testing their campaigns without user identifiers. For example, it is now possible to utilise advanced contextual models that drill down to the level of content sentiment and can gauge users' emotions.”

Nadia Gonzalez, CMO at Scibids: "Privacy-first solutions can be complex, which is likely why Google has extended its deadline again for banning third-party cookies, giving more time to advertisers and publishers to test alternatives. It is possible now, however, to deliver proven performance without user tracking and profiling.

Anna Forbes, COO at Azerion: “Advertisers who step outside of the third-party cookie silo will unlock huge opportunities to successfully deliver high-impact marketing strategies. Exciting new brand-safe areas like gaming and the metaverse will accelerate the way a brand can engage with its audiences in the digital space”

Mark Pearlstein, CRO at Permutive: “Big tech's answer… is to make these audiences available but only in their own walled gardens; essentially being the guardians of consumer data and trust. This shouldn’t be their role in the ecosystem. In regards to restoring consumer trust, it's not up to big tech to fix the problem; it's increasingly becoming a brand's responsibility to consider where they put ad spend.

James Colborn, Head of Global Data, Teads: ““The cookieless era hasn’t been postponed, it is already here. Many browsers including Safari, Firefox and Edge have already made going cookieless imperative, indeed we have seen that 40% of the open web globally is already cookieless, rising up to 60% in markets with greater Apple penetration, such as the UK and US.”

Lukasz Wlodarczyk, VP of Programmatic Ecosystem Growth and Innovation, RTB House: “We see a great need for Google to decisively fight fingerprinting mechanisms prior to introducing FLEDGE on a bigger scale. Otherwise, the market will move away from cookies in favour of these privacy-invasive tools, instead of a real improvement in the form of dedicated privacy-preserving marketing APIs.”

Travis Clinger, SVP, Addressability and Activations, LiveRamp: “Regardless of the timeline Google has set, 45%+ of the internet is already cookieless, mobile in-app is cookieless, and CTV is cookieless. The time is now for publishers and marketers to control their destiny and transition away from cookie-based identity to people-based identity.

Paul Coggins, CEO of Adludio: “Rather than waiting another year for Google’s lead, the rest of the industry should be looking beyond cookies, exploring and testing more efficient and ethical methods, including first-party and behavioural data.