Amazon has emerged as the victor in the latest round of quarterly results among tech giants, with ad revenue up 18% in the most recent quarter.

The rise means its ad business made $8.76bn from April to June 2022, further encroaching on Meta and Google’s home turf.

While the bulk of its business comes from e-commerce and cloud computing, Amazon has quietly built an online ad juggernaut in the background by getting brands to pay to promote their products on the company’s website and app.

By contrast, Meta’s ad business shrank for the first time ever this quarter, missing analyst estimates, and the company forecasts a second consecutive decline in revenue in the current period.

Meanwhile, Snap was forced to warn investors that the online advertising market is experiencing some turbulence due to the economic slowdown.

Full Q2 results across major platforms are shown below: 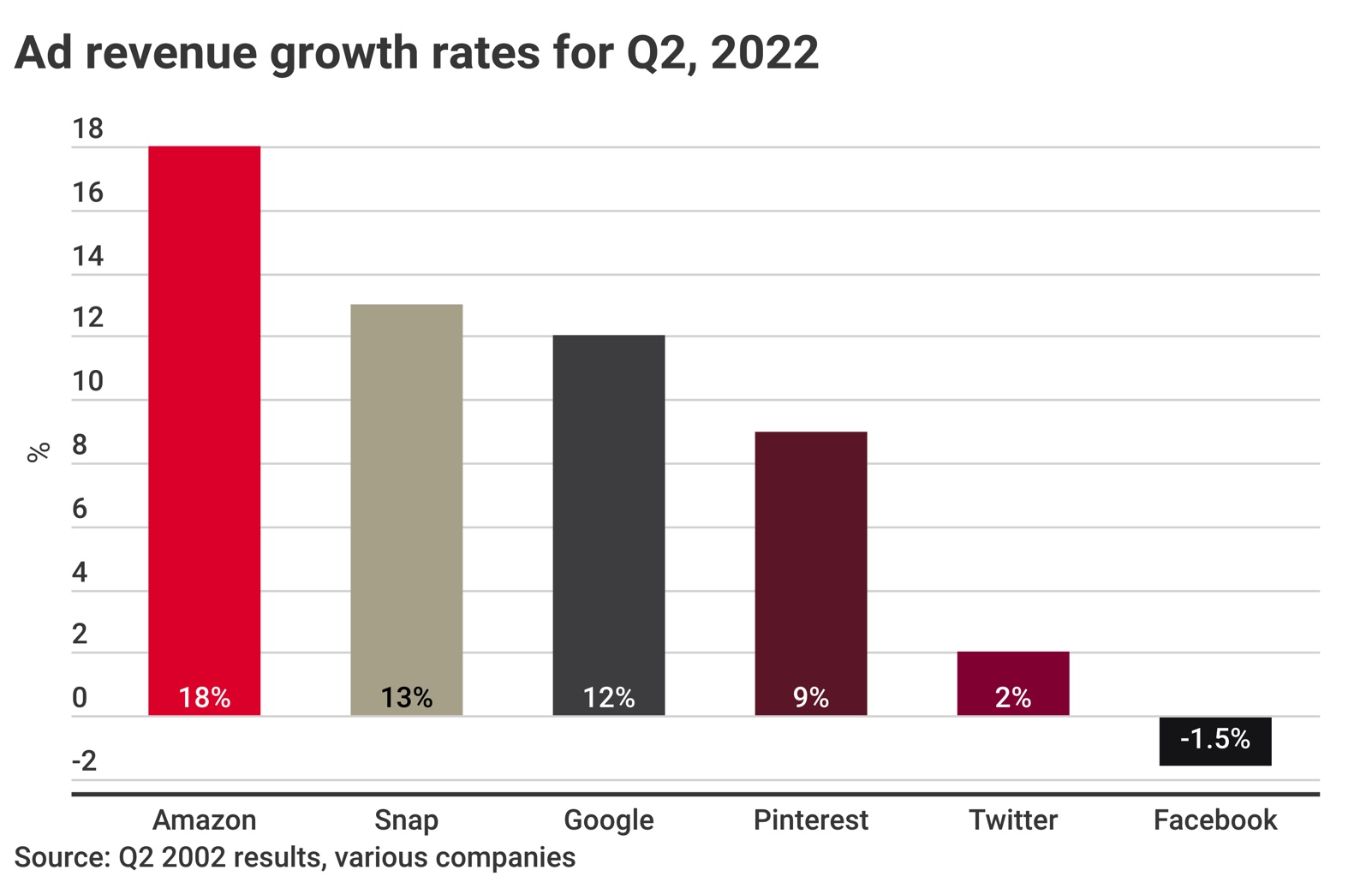 Sheltered from the iOS 14 storm

Amazon has a distinct advantage over other major social media platforms that have struggled amid a global economic downturn, privacy changes and shifting consumer behaviour.

Apple’s iOS privacy change last year made it harder for ad-supported sites to track users, leading to Meta claiming the change will cost it $10bn this year alone in lost ad revenue as users go dark.

Amazon is not dependent on Apple’s tracking, with its thriving e-commerce site functioning as a separate silo, where advertisers go directly to build campaigns. This has led to companies allocating more of their ad budgets to places like Amazon, where they can more likely see a return on their investment.

In a search result, the first few of Amazon’s thumbnails are often “sponsored results.” On a product page the top bar, the bottom third, and large swathes of the right bar and main body are also part of the ad inventory.

Ikkjin Ahn, co-founder and CEO at Moloco said: “The continued growth of Amazon’s advertising revenues is a testament to its strong, retail media strategy. In Q2 2022, Amazon further demonstrated its ability to monetise the wealth of accurate and up to date first-party data collected on its platform.

“Brands and merchants continue to throw money toward Amazon for access to its data, bidding for greater presence at the top of its search, product, and ‘add to cart’ pages – which translates into clicks and sales. The way forward for retailers and marketplaces is to leverage performance-based solutions that prioritise customer-targeted and uniquely relevant product ads based on real-time shopper behaviour. “

“Little seems to have been done to secure Facebook’s other asset: the users”

Commenting on Meta’s historic revenue growth drop, Niki Grant, Head of Search, The Kite Factory, said: “Facebook captured advertisers with the lure of an Aladdin’s cave of data riches with a large and desirable userbase, all of which could be reliably measured. The impact of the iOS14 update is undeniable, however little seems to have been done to secure Facebook’s other asset: the users. Aside from measurement challenges and the broader hostile market, the Facebook product itself has fallen into a lull, publishing pale imitations of competitor functions in a desperate effort to keep users engaged. Without rigorous measurement, market-leading audience targeting, or innovative formats, Facebook is lacking the competitive edge to take on more agile market entrants, especially in an environment where budgets are tight.

“Whilst Facebook has focussed on the Metaverse – which is of little consequence to the present-day in it’s conceptual state - Google has been enriching it’s Ads offering. From new automated campaign types to enhanced visual search formats, Google has been hard at work developing features and tools to support brands in both marketing creativity and efficiency.

“YouTube’s growth may seem minimal, but the Google-owned video platform presents a much more credible contender against the rise of TikTok. Given the release of multiple connected TV features and the large and loyal user base, YouTube remains a strong option for advertisers, even in the currently hostile market.

“Search budgets aren’t immune to the cull in times of purse-strong-tightening, however, last click attribution and a CPC bidding model remains attractive, especially when things are tight. Google’s evolving automation capabilities, and announcement of new features such as AR Shopping formats promises new opportunities to brands and secures budget to test these shiny, new tools.