Netflix has signed up to the Broadcasters' Audience Research Board TV (BARB), meaning its audiences will be measured by an external, independent body for the first time.

Previously, the streaming giant has only released snapshots of its viewing data, highlighting the success of its most popular shows. BARB will begin reporting Netflix's viewing figures from November.

Reed Hastings, Co-CEO of Netflix, said: “Back in 2019, at the RTS conference in Cambridge, I welcomed the idea of Netflix audiences being measured independently. We’ve kept in touch with BARB since then and are pleased to make a commitment to its trusted measurement of how people watch television in the UK.”

Comparing apples to apples (and Strictly to the Crown)

The move is strategic for Netflix, which is under increasing pressure from UK policy makers to abide by the same rules as broadcasters in order to operate.

More significantly, it also comes alongside the launch of Netflix’s ad-supported tier, which is expected to go live on November 1st, and will help the business attract advertising partners.

Netflix audience figures will now be presented daily on what comes as close as one can get to an like-for-like basis with broadcasters such as the BBC, ITV, Channel 4, Channel 5 and Sky — the first time such comparisons will be able to take place in the UK and be made public.

In the US, independent research body Nielsen has been measuring Netflix for years, but not as consistently.

BARB’s overnight viewing figures are calculated within the hours of 6 AM and 2 AM, but streaming services such as Netflix do not operate within timeslots. Instead, BARB data will show the Netflix viewing on the same day, in the same timeframe. This means advertisers will be able to compare how many people watched “The Crown” and “Strictly Come Dancing” if both were made available on the same day.

In 2021, BARB, announced an upgrade in its audience reporting with the introduction of subscription video-on-demand (SVOD) and video-sharing platform measurement. It measures the reach and total time spent viewing SVOD services, including Amazon Prime Video and Disney+, alongside Netflix.

This tool, underpinned by technology developed by Kantar, also measures video-sharing platforms like TikTok, Twitch and YouTube, regardless of whether these services have chosen to subscribe to BARB, through data collected from router meters installed in BARB panel homes.

This new move sees Netflix voluntarily submit data to BARB, which is already done by rival Disney+. For viewing from November 1st, BARB will report Netflix viewing every day at both a service and a programme level to its clients. This will be in the same way it reports viewing for over 300 other subscribing broadcast channels, broadcast video-on-demand (BVOD) and advertising/subscription video-on-demand (AVOD/SVOD) services.

Netflix viewing data will be available to all BARB clients on the morning of November 2nd through existing viewing analysis software and data-processing bureaux.

Shredding more light on the traditional TV versus VOD split

While Netflix and other streaming services have clearly established themselves within the television-viewing ecosystem, broadcasters continue to account for the lion’s share of viewing in the UK. Across 2022, broadcasters’ linear channels and on-demand services have accounted for around two-thirds of all identified viewing, while SVOD/AVOD services comprise about one-sixth of all viewing.

The average daily viewing time to broadcasters’ services was 159 minutes in September 2022, and the average for SVOD/AVOD services was 36 minutes per day. From the second week of November 2022, BARB will publicly report the monthly reach and share of viewing for broadcaster groups and SVOD/AVOD services which account for more than 0.5% of total identified viewing. The accompanying table previews the viewing summary that will be published on the website each month. 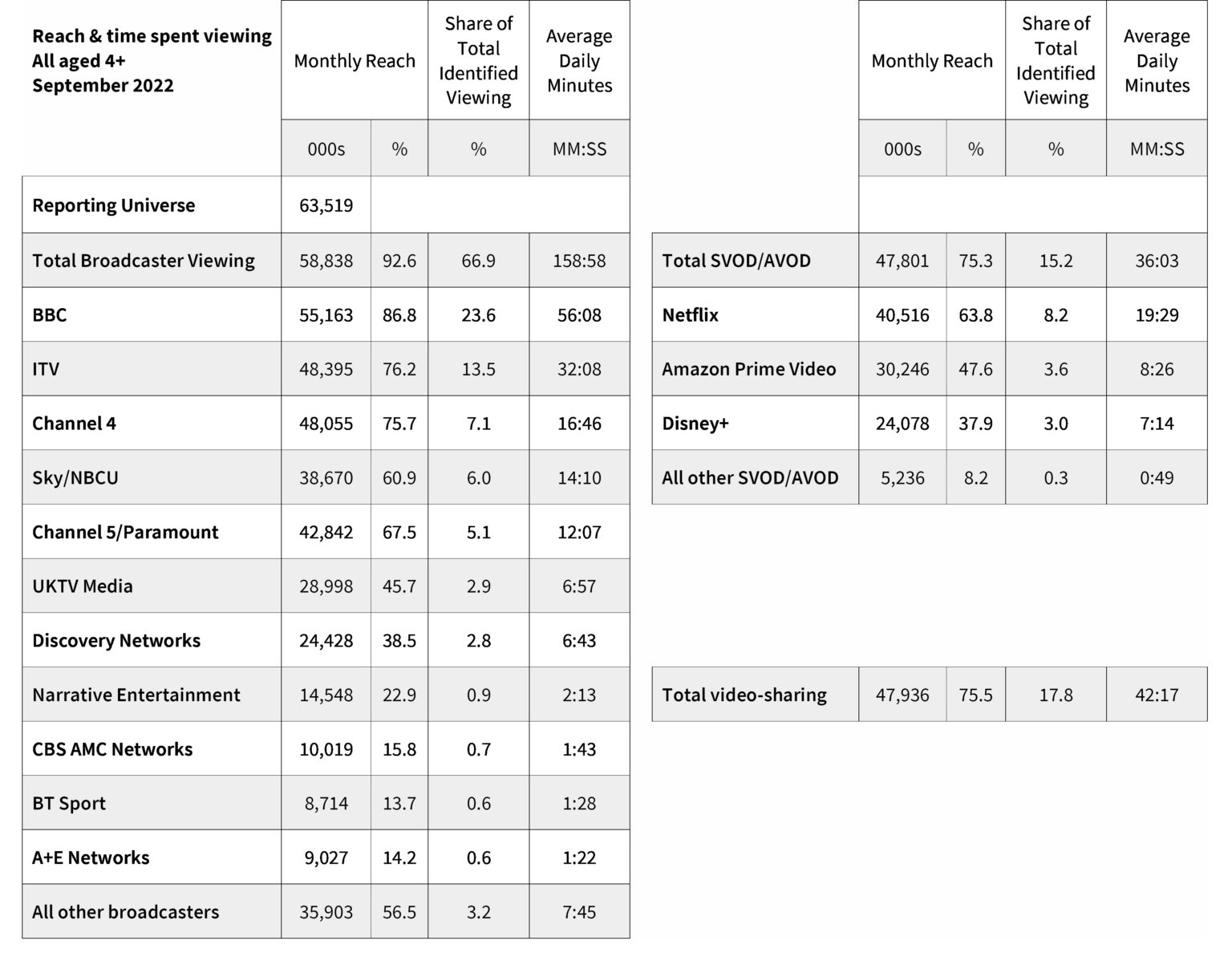 Also from November, BARB will extend its weekly reporting of the top 50 shows to include shows across all linear channels and SVOD service providers. This will reinforce BARB’s rankings as the most comprehensive and representative record of the most-watched shows in the UK.

Justin Sampson, Chief Executive of BARB, added: “Our audience measurement continuously adapts to accommodate the new platforms and devices that are being used by people to watch their favourite television shows. We took a big step forward last year when we started reporting audiences to streaming services. Netflix’s commitment to BARB sends a clear signal that what we’re doing is valuable to new and established players in the market.”

"This creates a level of standardisation and consistency... for brands and agencies"

David Cloudsdale, Founder at Adalyser, commented: “This feels like a significant development for UK video advertising. Just when we thought the fragmentation of measurement metrics would make planning and reporting more complicated, this creates a level of standardisation and consistency that makes it easier for brands and agencies. With other streaming services potentially considering an ad funded model in the future, it’s an important first step. Adalyser will report Netflix viewing data from 2nd November.”

Should UK broadcasters be worried?

Sydney Vieira, head of customer success at 7th Minute, said: "While [the announcement] was big news this morning, it doesn’t come as a surprise; Disney+ has been a Barb subscriber for over a year, and as Netflix readies itself to introduce its much-anticipated ad-funded model it knows only too well that advertisers will want transparency about what their media budgets are buying – particularly in the currently challenging economic environment.

"Should UK broadcasters be worried? On the one hand, yes probably. Netflix has collected rich audience insights for years, and the Barb viewing figures are the icing on the cake. This requires traditional TV broadcasters to provide as much value as possible to advertisers and demonstrate the benefits and value of linear as budgets move across to streaming services.

"But on the other side of the coin, these same broadcasters also sit on a wealth of data. Organised, analysed and understood, the granular insight that this enables will let them compete in a market that will increasingly focus on precise audience and contextual targeting."