Buy Now Pay Later (BNPL) provider Clearpay has had complaints upheld by the Advertising Standards Authority (ASA) after it judged three Instagram posts to be “irresponsibly” encouraging people to spend more than they could afford.

The ASA warned Clearpay Finance “to ensure that their ads did not encourage people to spend more than they could afford” and issued the ban on the posts, placed between October 2021 and January 2022 after it found them to be breaching the CAP Code rule for social responsibility.

No intention to promote carefree spending

Clearpay defended the posts, stating that its BNPL offer gave customers the opportunity to get their buys immediately and pay in four interest-free instalments over six weeks. The set-up is free for customers who pay on time and the agreements were exempt from regulation and outside the Financial Conduct Authority’s (FCA) consumer credit regime.

A Clearpay spokesperson said: "Clearpay has strict guidelines to ensure our advertising does not encourage people to spend beyond their means and our business model is designed to support responsible spending. This includes the fact that a customer is unable to use our service if just one payment is missed and we are transparent about payment due dates.

"Advertising can be subjective in nature, so we welcome these clarifications from the Advertising Standards Authority's review into how buy now, pay later products are advertised."

The first, posted last October featured a meme showing two images of Seong Gi-hun from the hit TV show Squid Game. In one image, he was smiling below the text “Sticking to my monthly budget”, while the second image showed him looking stunned below text stating “ASOS offering 20% off site wide”. At the bottom of the post appeared “T&Cs apply clearpay.co.uk/terms and “turns off push notifications” alongside a series of hashtags including #Shopping, #PayOverTime, #PayBetter and #PayIn4.

The second post later that month featured a version of the ‘Tell me without telling me meme’ including an image of multiple ASOS parcels below the text “Tell me you love Clearpay without telling me you love Clearpay”. It included the statement “Tag a friend who has a Clearpay addiction [eye emoji] Remember to spend responsibly and return some of those!” alongside similar T&C text and hashtags to the first post. 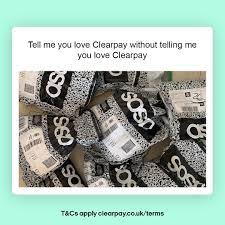 The last post at the start of this year showed a pie chart titled “Why I need new clothes” with a key including the section [insert brand here] is having 40% off and a small section keyed “I need jumpers for winter”. The post held the caption “Why am I like this” with the ‘woman raising hand’ emoji.

Clearpay went on to say that the Instagram posts under scrutiny did not use phrases that risked confusion or encouraged irresponsible or carefree spending. The intention behind the posts was actually to highlight behaviours that could potentially lead to irresponsible lending, and they were aimed to educate followers on the importance of responsible spending.

The first post was in fact intended to identify making a non-essential purchase because an item was on sale as potentially detrimental, the BNPL provider said. It also suggested turning off marketing push notifications as an avoidance strategy.

In relation to the second post, Clearpay believed its intended message – to purchase multiple items in different styles and sizes to then return most of them, to avoid saving up to buy clothing upfront if they didn’t intend to keep it – was socially responsible as it highlights additional thought consumers put in their buying decisions.

The final post, Clearpay argued, was not actually an ad for their BNPL, with no call to action to consider Clearpay, and had been prepared responsibly to educate followers on how important responsible spending was by making them question if they really needed to buy something just because it was on sale.

Clearpay pointed out that the first two posts included clear links to its T&Cs page. It added that followers would likely be familiar with BNPL and the use of memes was intended to deliver a responsible spending message in a way that was thought to be the most effective in engaging with a ‘young adult’ audience.

"Making light" of no self-control on spending

Despite the ASA acknowledging the terms of Clearpay’s service, and that it was not a loan or credit card offer, it disagreed with the BNPL provider on the point that the messaging in the posts was responsible.

The watchdog said it thought followers would understand the posts as “making light of consumers who were unable to exercise self-control” over their spending.

“We further considered that consumers would understand the scenario depicted in the [first] ad was linked to the use of Clearpay,” it added, pointing to its belief that the ads encouraged consumers to use a form credit with delayed payment, and spend more than they could afford.

The ASA also contended that the third post did in fact fall into the remit of the CAP code, being posted on Instagram, a non-paid-for space under the advertiser’s control. Because it was connected with the supply of the BNPL service, the post was considered to be a marketing communication.